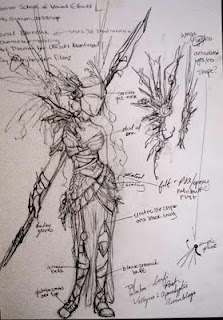 The next big project is now underway. I’ve decided to focus on costuming more intensely in an attempt to build a more specified portfolio. Most of my costuming work so far is craft/prop related and falls into the sci-fi and fantasy genres. I’ll continue to focus on this type of costuming.

The next project is what I’m calling a “Post-Apocalyptic Valkyrie.” A valkyrie is a female figure from Norse mythology who decides who will die in battle. They are often depicted as armored women carrying shields and spears while riding winged horses. This version is a cross between two mythological figures; valkyries and shield maidens. In the oldest Norse mythologies valkyries are associated with ravens and ride wolves through the battle fields. Occasionally the valkyries themselves are winged.

I’ve come up with a design that is a conglomeration of these mythologies with a sci-fi twist. The “Post-Apocalyptic Valkyrie” is a winged warrior maiden who has been escorting fallen heroes from the battle field since the 14th century to a future post-apocalyptic era. She and her attire have evolved with the centuries. She wears remnants of the traditional Viking armor and, a mix of accessories from across the centuries. Her outfit thus reflects the evolution of the warrior. The main component to the costume though is the assemblage of scrap and junk materials that one would find strewn across a landscape after an apocalypse. The basic patterning is what identifies her as a valkyrie (ie: spear, feathered helmet, armor cuirass…) but the materials have changed, replacing feathers and leather with scrap metal and mechanical pieces.