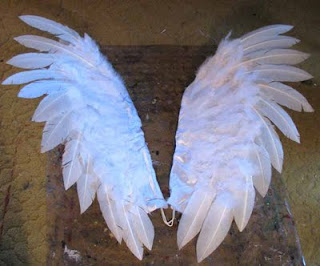 Wire Wing Form with Turkey Feathers
This year for Christmas my local church is presenting the story of Christ’s birth through music and drama. I’ve volunteered to help with the production as much as my tight schedule will allow, taking on projects one at a time. To start, I’m making the wings for Gabriel and the choir of angels (a small ensemble of 6 children). It took some time to make Gabriel’s wings, but fortunately I already had all the supplies I needed on hand.

Beginning with some scrap chicken-wire and some heavier gauge wire I made simple understructure that I could glue and tie everything to. I covered this with fabric that had a couple rows of turkey plums sewn in place. For the major coverts I simply glued some turkey quills in place. Glue will do since the production is soon and will only run once. For a longer show I would have glued and sewn the feathers in place. 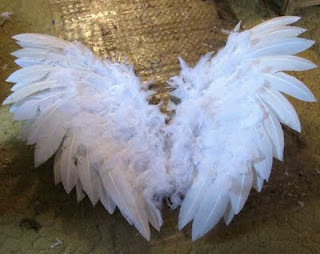 Wings with Primary and Lesser Coverts
Some scraps of turkey feather boas were used to the lesser coverts. Then I attached the primaries that I had made. To my great fortune I was able to make the call that these wings will be static, not articulated. Therefore, I was able to use a rigid wire understructure and, only needed to make a couple primary feathers to achieve the look of a full pair of wings. All that’s left to do is find some gold rope to use as a harness. 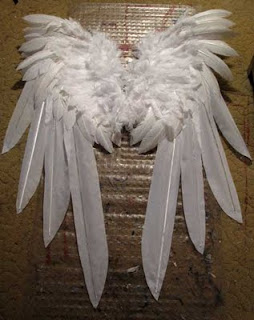 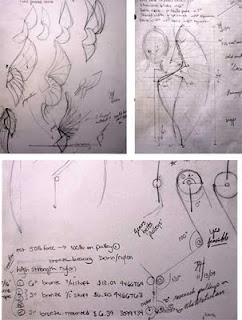 I’ve begun drafting the wings for the Valkyrie costume. They are quite different from the Angel of Death wings, although they will still be based loosely on a bird's true wing structure. The structure for animating the wings should be significantly simpler as well.

I’ve decided I want a vertical span when the wings are fully open instead of horizontal, which is much more a fantasy wing design than anatomically correct. A vertical design, however, has the benefit of being easier to wear in crowded areas (such as Salem on Halloween)

As exciting as it would be to have exposed gears operating the animation, I simply can not afford the type of gear motor I would need. Chances are I’ll be using a network of pulleys. Pulleys shouldn’t need to be so precisely aligned as gears, (so the wings will be able to flex a little). Additionally, the wire rope can be pulled and fastened using a belt, which works for a costume that already has a number of belts on it. I’ve yet to come up with a way to make the belt work appear truly functional as opposed to merely decorative. It isn’t fitting for a post apocalyptic warrior to be wearing a whole lot of decorative pieces (the Costume is about the Character). The only true decoration in the costume should be remnants from pre-apocalyptic periods particularly Nordic Dark Ages and Early Renaissance Design. I think that I can get away with using the belts as "holsters" for ammo and/or projectile weaponry and, in some areas, for "added protection". I’ll have to work with it more when the time comes. As for the assemblage of junk and scrap metal that will constitute a good portion of this costume, I’m getting away with saying it functions as protective armor. (even though it will be elaborate, eye-catching and primarily for effect)
No comments: 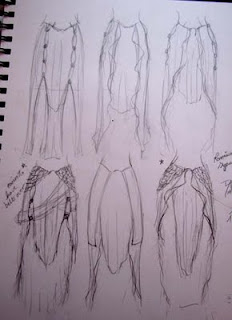 Lately it’s been fairly difficult to find the time to work on the Valkyrie costume. This weekend I’ll have a break from work though and should be able to finally make some serious headway on my various art projects. I’ve started playing around with the design for the Valkyrie skirt. I’m thinking of using a blue chiffon. I’d like something a bit “flowy”; loose, comfortable, pretty while at the same time battle appropriate. I’m toying with the length and placement of darts. I’d like my legs to be visible from the knee down, at least on one leg, because I’ll be wearing armor that I want to show off, plus it is more practical for a warrior to be wearing a slit skirt that is easy to maneuver in.

I’m not satisfied with any of my first drafts yet (hence “1st draft”) but the bottom left design is getting there. I think I need to start working some asymmetry into the design.

Halloween: The Angel of Death 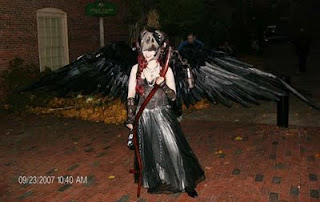 The Angel of Death, Salem MA
On October 30th I attended the Official Salem Witches’ Ball in Salem MA for the purpose of entering the costume contest. I went in my Angel of Death: Version 2009 costume. Unfortunately I wasn’t able to bring the matching scythe that I made especially for this costume. On the other hand, the replacement prop lantern that I brought turned out to be quite a hit. The lantern was also more “crowd-friendly” and as a whole worked out better for the environment I was in than the scythe would have. I won first place in the costume contest at the ball and am already planning on going again next year. Sadly, my wings were broken by the crowds of Salem on Halloween night. Next year I’ll be wearing something more durable that can withstand the pushy crowds. I’ll also need to go downtown much earlier in the day. It’s just too packed out at night and large/delicate costumes are in constant danger.
More pictures will be coming soon.
No comments: