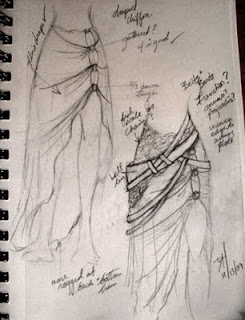 I’ve yet to come up with a way to make the belt work appear truly functional as opposed to merely decorative. It isn’t fitting for a post apocalyptic warrior to be wearing a whole lot of decorative pieces (the Costume is about the Character). The only true decoration in the costume should be remnants from pre-apocalyptic periods particularly Nordic Dark Ages and Early Renaissance Design. I think that I can get away with using the belts as "holsters" for ammo and/or projectile weaponry and, in some areas, for "added protection". I’ll have to work with it more when the time comes. As for the assemblage of junk and scrap metal that will constitute a good portion of this costume, I’m getting away with saying it functions as protective armor. (even though it will be elaborate, eye-catching and primarily for effect)