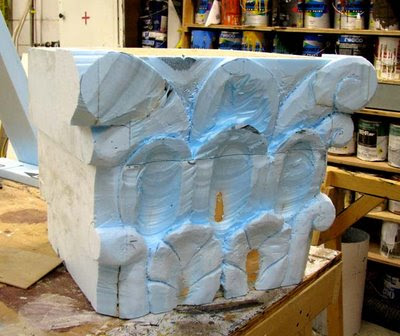 Foam Capital in Process
Theater Production has been busy getting everything up and ready for the show April 17th. The carved foam capitals underwent quite a bit of work, when we decided to change the design a bit. Fortunately we are able to use most of what I started. There are two sets of capitals we must form. The set I had started were square and foamed out 2 inches. We decided that where we originally had the square capitals we needed to make round ones, so the square pieces were moved to the other side of the stage and cut down to fit the other columns. At first it seemed like making this switch would cost me a lot of wasted time. However, it turns out that I will be saving a lot of time by making these changes. The square capitals are now smaller and only need to be three sided so finishing them won’t take nearly as long. Also, the new round capitals have less surface area so they also won’t take as long to complete. And in the end they will look much better than where we were originally headed with them, plus I’m a lot less stressed about this project now. 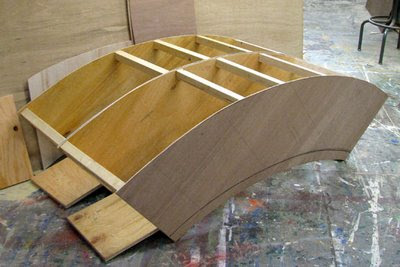 Portion of the Archway