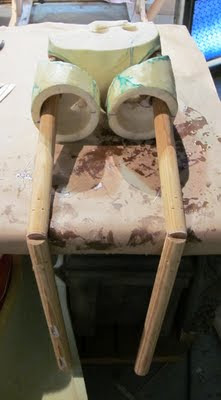 Lower Half of Headless Body
With the upper half of the frame for the headless body complete it was time to finish up the lower half. The legs were previously made out of wooded dowels. The pelvis and upper thighs were carved out of a foam mannequin. The three parts were beveled so that the legs would bend properly. The legs were attached to a wooden dowel set at the hip height. 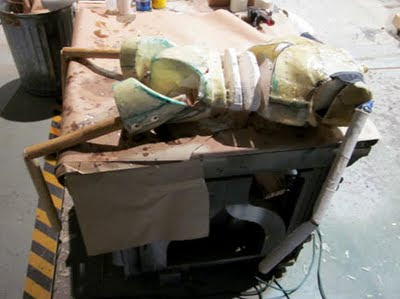 Headless Body Frame
The two halves were assembled and the frame for the headless body was complete.

As an afterthought I realize that the foam upper thigh pieces were superfluous. I used them thinking that they would restrict unnatural movement of the legs much in the same way that the sculpted epoxy was used to restrict the movement of the arms. As it turns out any unnatural movement would have been eliminated by the shape of the pelvic piece, and the final layers of foam padding. The same might be true of the shoulder sockets but of this I'm not so sure. It would have been better to have had a little more flexibility in the end.