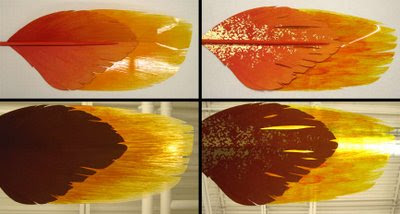 Half of each feather is made of sintra (PVC foam) while the other half I’ve wanted to make out of painted acetate (clear film) I’ve been having a terrible time getting the look I want because the piece will be back lit. I had been trying to achieve a faux stained glass appearance using inks and acrylics with a lot of gloss medium. The inks didn’t adhere as well as I had hoped and the acrylics look dull and streaky. Thanks to my mom though, I finally found something that works. Jacquard’s piñata paints are perfect for creating a stained glass effect on plastics. They dry quickly and are both transparent and vivid, the combination I was having so much trouble achieving. With this discovery made I am now on my way with creating the feathers. I also decided on the addition of some rough gold leafing which gives the pieces a new reflective quality. This helps tie together the reflective surface of the acetate and dull opaque sintra. The addition of slots in the sintra also helped to unify the two parts. The only other element that I used in the first trial that I would like to keep is the gloss medium on the acetate which creates a more textured glossy surface rather than the hard flat shine of the acetate.