Our first mainstage show, "The 39 Steps" required a lot of scenic props pretty much all of which were on casters: door frames, window frames, sign posts, and window & door add-ons. For the most part Tyler made the scenic props, but I did play my part by taking care of the surface treatment. 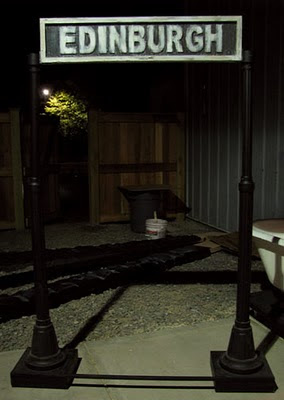 My favorite were the signs for "Edinburgh" and "Alt Na Shelach." The reason they were fun: 1/4" blue foam. It's been our friend for a number of projects this summer. SO much easier to cut letters out of blue foam then to try using a scroll saw (which we don't have).
1 comment: 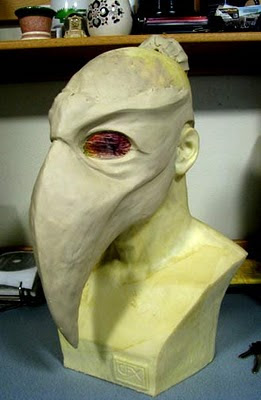 Phoenix Mask
Surprise, surprise, as busy as I am at the hangar this season I've still got a few side projects going on. For one, I'm already working on next year's Halloween costume (shock!), oh and, it has wings too. (of course)

I'll be living in an area with some pretty major costume contests this Halloween. Not only would it be a great publicity opportunity but, it may also help fund my graduate education *fingers crossed*

My first idea was to create a harpy costume but, I changed my mind and decided to work with a more familiar subject: a phoenix. For many reasons the phoenix is a better choice for me including...
- imagery, color palette & materials with which I'm very familiar
- more "flashy" and attention grabbing than a black harpy
- as much as I'm fascinated by dark imagery, I do not want to glorify it. The Angel of Death costume is quite dark and scary...As It Should Be! It was a portrayal of a terrifying yet beautiful character (which according to my own interpretation is in actuality a servant of God, not evil.) On the other hand, a harpy would simply be, um, dark and scary for darkness sake. It would be cool but not necessarily good - for me at least.

So, the first part I started to work on was the mask. I began with an oil-based clay model.
1 comment: 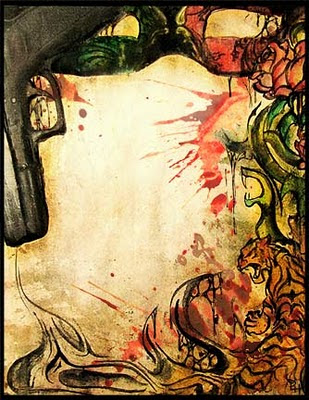 In addition to making props this summer I have also been conscripted into making posters for the three experimental “Wedge Productions.” One more thing in the portfolio I say. The first show, “Kill to Eat” by Caridad Svich, takes place in a grungy, near-future city somewhere in (I would presume) at the time of Carnival. Dark and violent, oh and tattoos seemed to be a major symbol.
No comments:

First show of the season at Hangar Theatre and, once again, I found myself making fake fish. It was fun having the chance to revisit an old assignment and see if I could “do one better.” Consequently, what could be better than EXPLODING STICKY FISH!

Instead of searching endlessly for an acceptable, anatomically accurate-ish toy fish, I just built one out of clay. The plan was to make a plaster mold and from that create a latex fish. The first attempt was the most memorable. I set a few layers of brush on latex then, filled the whole fish with a sloppy mixture of latex and sand (knowing full well that it would take a long time to dry but, have a very realistic weight, feel, and “floppiness”) The outer layers cured in less than an hour and with the fish named “Roger” looking pretty good I popped him in the toaster oven (referred to as the easy-bake-fish-oven). Heat will hasten the curing of latex with little side effects, oh, unless it’s also packed full of sand in which case the unset innards will expand at an alarming rate, bursting through the thin seams and spilling all over the easy-bake-fish-oven-easy-removal-drip-tray. Thus is this summer’s fish story. Roger now decorates Adam's (ATD) work space.

The fake gutted fish was a very convincing piece of propage especially when it was still hot out of the oven and all squeezy inside. Seeing as how a fake gutted fish was not called for in “The 39 Steps” prop list though, I made a second fish, this time with just a latex skin, fully cured in the oven, then filled with poly fiber and sand - you know - the normal way to make fake fish. La Sigh….the other way was more fun. 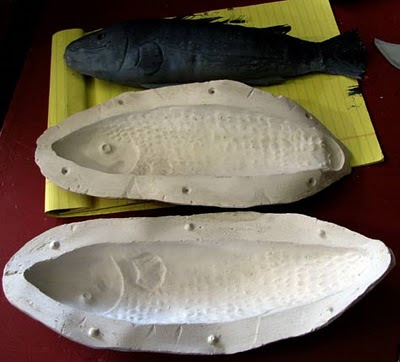 Soon to follow: pictures of the actual exploding sticky fish – this one is the fish used in the show.